MARTYRS OF UGANDA PILGRIMAGE AT HOME 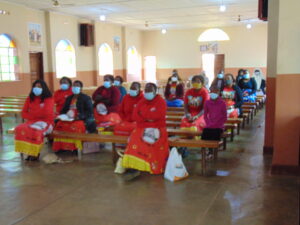 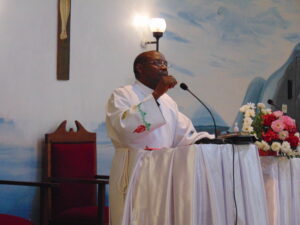 5 June, 2021 Lilongwe: A group of Malawian Catholics who for the past 11 years have been gathering to pray with the intercession of the Martyrs of Uganda through a pilgrimage to Namugongo in Uganda, this year have prayed at home.

Isaac Mphweya is the publicity secretary of the grouping and said that every 3rd June is a day to commemorate the martyrdom of the 23 Anglican and 22 Catholic converts to Christianity in 1885 to 1887 in Uganda.  He said that according to history, they were martyred by King Mwanga the second.

“Due to the Covid19 pandemic we have not been able for the past two years to go on a pilgrimage to Uganda. This year we are commemorating the martyrdom of our African Saints in different parishes within our chapters.  Others have gathered in Mzuzu, others are in Zomba, Others are in Blantyre while we are here in Lilongwe. We have chosen Catholic Parishes whose patron saints are either Martyrs of Uganda or one of them,” said Mphweya.

He said that the team that met at Kaggwa Woyera Parish of the Archdiocese of Lilongwe had a retreat facilitated by Fr. James Mkwezalamba who also celebrated mass for them.

While reflecting on the lives of the African Martyrs, Fr. Mkwezalamba also reflected on the dilemma of Peter and Paul on who is to be served. He said that while Peter emphasized on the fact that salvation was for the Jews or those gentiles who were willing to follow the Jewish customs and traditions Paul stood for the position that salvation was for all.

“It took the Holy Spirit to appear to Peter in the vision he saw a lot of animals with the words that say ‘You have no right to call what God created profane’. This only tells us that Peter was cleared of his dilemma and that no food could determine who should be saved,” narrated Fr. Mkwezalamaba.

He went further to ask the Namugongo pilgrims that in their prayer life and daily life they should not segregate others and take themselves as holier than the others who are not part of them.

The Malawi Friends of Namugongo according to Mphweya was founded some 11 years ago and allows all Christians regardless of faith and denomination to join.