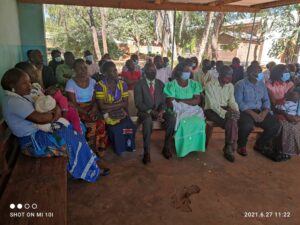 Participants to the orientation meeting of the marriage Encounter of 27 June at Mlale Parish. 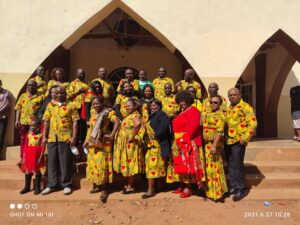 Members of Mtima Oyera and Msamba Circles of the Marriage Encounter pose for a photo after Mass at Mlale Parish where they also led in Liturgy and offertory.

The Marriage Encounter (ME), a grouping for married Christians in the Catholic Church has challenged that it is easy to fight Gender Based Violence using church structures. Clement and Thokozani Bisai are Chair couple for ME Central Region Chapter and spoke at a function that took place at Mlale Parish on 27th June 2021 where Catholic families from the Parish requested for an orientation meeting.

“We have zero cases of gender-based violence cases in our members’ families and we doubt if any of our members can think of committing suicide because there are no chances. We preach, live and eat love. Our goal is to ensure that all families live in peace and harmony with each other. Our movement seeks to help deepen love in marriages then if love is so deep, how would one member deprive the other of the same by indulging in GBV? The movement equips its members with effective communication tools to help improve relationships between spouses,” said the pair leaders.

Mr. and Mrs. Bisai said that they were hopeful that if families from Mlale Parish in the Archdiocese of Lilongwe formed and joined the Marriage Encounter group, not only the Church would manifest her powers of preaching love but that even the communities surrounding the Parish would benefit from good examples of renewed families.

Some families from the Catholic Parish of Mlale in Mitundu area requested Marriage Encounter groups of Mtima Oyera and Msamba Parishes to lead an outreach activity aimed at helping them understand what the movement is all about and what it does.

The couples at Mlare Parish had been organising themselves as a way of preparing to join the Marriage Encounter.

According to the Bisais, couples willing to join ME are supposed to attend a 3-day retreat that is called Original Weekend to start their Marriage Encounter journey. Such retreats are held once or twice a year at a designated retreat centre.

“Our immediate retreat for the central region is scheduled for three days from 30 July to 1 August in Lilongwe,” Said Mr. Bisai.

The Catholic Church in Malawi has 3 specialised groups of family movements namely, the Christian Family Movement (CFM), Couples for Christ and the Marriage Encounter.