LET US NOT DESPISE THE POOR – ARCHBISHOP GEORGE TAMBALA 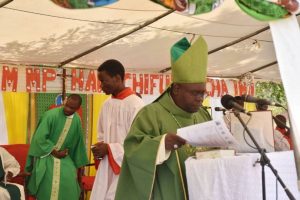 On the 33rd Sunday in Ordinary Time, the Church in Malawi joined the rest of the Catholic faithful in the world to pray and support the poor. The national event this year took place at St. William, Mpale outstation of St. Francis Kanengo Parish in the Archdiocese of Lilongwe. His Grace George Tambala, the Local Ordinary of the Archdiocese of Lilongwe, led the Solemn Mass.

In his homily, the Archbishop said the Scriptures do not lack examples on the poor. He said that the Bible is full of examples about the poor people. He continued that even Jesus Christ himself was born from a poor village and poor family. He said that he was born in poor conditions.

The Archbishop exhorted the congregation not to despise the poor. He specifically asked the young girls and boys not to scorn their fellow pupils at school because of poverty.

“I ask you children not to despise your fellow pupils at school because of poverty. Respect them. They are also the children of God.” he said.

The Archbishop lamented the unbecoming behaviour of some people who employ house maids or guards but pay them miserably. He said by paying our workers little wages, we prolong their poverty and we are responsible for their sufferings. 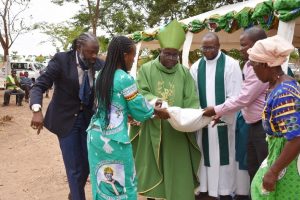 His Grace also wondered that parishes are able to organise fundraisings for parish developments such as building parish fences, priests’ rectories and other developments, but never heard of parishes fundraising for the poor, yet at the same parish there are poor students who have been sent back home because they have not paid school fees. He also said that at the same parish there may be people who fail to receive proper medical care because they are too poor to afford drugs. The Bishop challenged the faithful to think seriously about the poor. 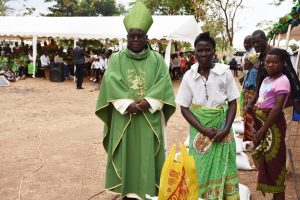 Archbishop Tambala with some of the needy at Mpale Church, Archdiocese of Lilongwe

The National Pastoral Coordinator, Fr. Joseph Moloka Sikwese who was accompanied by Fr. Henry Chinkanda, also from the National office, graced the event. 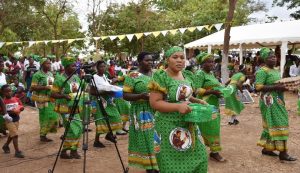 Pope Francis, at the end of the Year of Mercy in 2016 declared the 33rd Sunday in Ordinary Time to be the day to consider, pray and support the poor in any way possible. He said throughout the world, Christian communities can become an ever-greater sign of Christ’s charity for the least and those most in need.

The theme for this year was from the second letter of Paul to the Corinthians, 8 verse 9, “For your sakes, Christ became poor.” At the end of the celebration of the Solemn Mass, the identified needy people from around the villages of St. William, Mpale Church received some food stuffs, soap and other items; a contribution from well-wishers. All the parishes are encouraged to continue helping the poor in different ways.