LAITY DAY COMMISSIONED IN THE ARCHDIOCESE 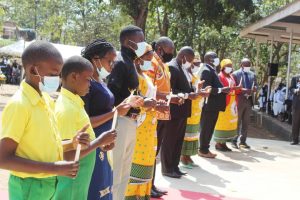 30th July, 2022: The Catholic Archdiocese of Lilongwe launched laity day on Saturday 30th July 2022 at the Maula Cathedral open ground. The local ordinary of the Archdiocese, His Grace Most Reverend George Desmond Tambala officially commissioned the day during a Mass Celebration.

The archbishop took time to urge all Catholic faithful to use social media prudently and only to the glory of God and His Church.

“We have noted the Mushrooming of so many WhatsApp and Facebook pages and groups bearing the name Catholic. Much as we appreciate the desire to share Good News and other beneficial teachings of the Church, we have noted that some have turned these initiatives into gossip zones whose main agenda is to destroy each other’s character and reputation,” observed the archbishop.

The local ordinary for the Archdiocese of Lilongwe further challenged Catholics to seek proper guidance from relevant authorities in establishing social media forums that will bear the name Catholic.

“We have noted that others are soliciting funds in the name of these Social Media Church Groups yet lack accountability and transparency. Let anybody soliciting funds in these groups be accountable and seek permission, especially here in the Archdiocese of Lilongwe, otherwise stop tarnishing the Ecclesiastical name,” Archbishop Tambala said.

He further said that the same forums and pages are becoming a source of bitterness among members and participants. He then advised those filling afflicted by these groups to quit the groups instead of taking matters out as if they were official.

He however, said that there are gains through such groups through defense that the Church is getting from some Catholic faithful against unjustified aggression.

On his part Archdiocesan Laity Chairperson Mr. Gabriel Kamlomo, called on the faithful in the archdiocese to embrace the day as a remembrance for the Church’s commitment to laity issues. He challenged the laity to be more active in developing the diocese to match the demands of modern time. He then thanked the Church in Malawi for establishing the laity day which will enable the faithful to deeply reflect on their role and contributions towards a self-propagating, self-evangelising and self-sustaining Church.