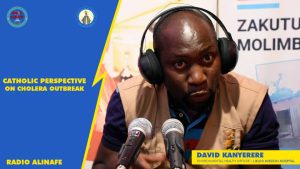 Catholic Perspective, a radio program that airs on Radio Alinafe of the Catholic Archdiocese of Lilongwe on 11 January, 2023 Wednesday night vindicated a Malawi Government move to suspend opening of schools.

The Presidential Task Force on Covid19 and Cholera suspended on 2nd January the opening of second term for all the schools in the major cities of Blantyre and Lilongwe until after ten working days.

In the program, a Mr. David Kanyerere an environmental health officer at a Catholic rural based Likuni Hospital in the Archdiocese of Lilongwe said that government did well in suspending the opening of the schools in the two districts.

“Actually, we are just winding up an exercise called preschool opening inspection sanctioned by the Lilongwe District Health Office. I still find more work to be done in most schools that I have inspected. Here is an example. Our government policy on use of public toilets stipulates that one public toilet should serve 60 people. This is not in our schools. Most schools I have visited have not more than 12 toilets against an enormous enrolment say of about 3,000 learners. This population requires 50 toilets if we are to be that compliant. I don’t think we have a good school that can erect the deficit 38 toilets within days. It is for this reason that I want to agree with the decision made by the Presidential Task Force not to open these schools at that time,” informed Kanyerere.

By this moment, David Kanyerere had presented a daily update of Cholera situation in the country as provided by the task force. He read out that in the previous 24 hours the country had registered 589 new Cholera cases with a total of 17 deaths. He said that in these figures Blantyre had 117 cases while Lilongwe had 106 cases. He indicated that the remainder was from all the remaining 27 districts with none above 27 cases. On the deaths’ figures, Kanyerere said that Lilongwe a lone had 7 deaths.

“I want to support the move government made. I have moved around some schools including those belonging to the Church. I find no joy in the conditions and ratio of toilet users to the facilities themselves. We should have experienced more deaths than what we have now if it were not for this move. There is too much congestion of learners in our schools,” said Fr. Louis.

“My first concern when I heard about the suspension was on the fairness of the Ministry of Education to allow other schools operate while others not. I feared for those writing national and international examinations this year. However, based on what we have heard based on health matters I want to agree that it was indeed a good decision. Health first and education can come later,” said Fr. Elias.

The program also highlighted on the need to have more water points in schools to allow all learners and teachers access clean water during the Cholera outbreak and beyond.

Some health specialists commented on the program that was recorded and rebroadcast on YouTube. One such specialist is a Mr. Kent Mphepo now studying public health at a college of medicine who wrote, “This is a very beautiful program indeed coming from the Catholic community. I watched and learnt many new things about cholera and how it can be rolled back. I particularly liked the emphasis on both prevention and enforcement.”

Meanwhile, the presidential task force released a statement calling for opening of all schools in the Blantyre and Lilongwe on Tuesday 17th January, 2023.

“Having reviewed the steps taken to date, those planned for the short to medium and long term, the cooperation of the school authorities in the two districts and other districts across the country, and Malawians in general, I am pleased to advise that the Taskforce is satisfied to allow primary and secondary schools in the two districts to open as from Tuesday 17th January 2023,” authored Co-Chairperson of the task force Hon. Khumbize Chiponda.

The current spell of Cholera outbreak in Malawi started in February, 2022.