ARCHBISHOP TAMBALA INVITES THE CONSECRATED TO NURTURE THE YOUTH 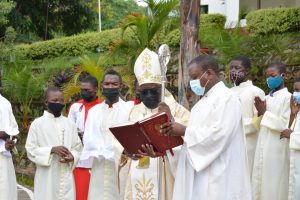 12th February, 2022: Archbishop George Desmond Tambala of the Catholic Archdiocese of Lilongwe has called upon the clergy and the religious in the Archdiocese to work towards ending the challenges youth are facing. He said this on the occasion of celebrating the world day of the consecrated on 12 February, 2022 at the Our Lady of Africa – Maula Cathedral.

“Drug abuse is apparently becoming a common challenge for our youth mainly in Lilongwe. If we don’t deal with this now we are pitching a future without the Church. The future Church is being built on these youths and hence I urge all the congregations to take this issue as a matter of life and death. The Church needs the youth more than anything else,” said Archbishop Tambala.

Archbishop Tambala went further to ask for unity among the consecrated arguing that it is only in unity that all what he expects from them could be done.

For the first time in the history of the Archdiocese, the local ordinary also announced the establishment of the office of the Vicar for Religious. He said that the move is Canonical and it comes in the spirit of building the much needed unity among the Religious.

“I wish to announce a new office that will be a bridge between and among the associations that we have as well as between you and the Church through my Office. I thank Rev. Fr. Bill Turnbull, M Afr. for accepting to be the Archdiocesan Vicar for the Religious.  I also thank Rev. Fr. David Niwagaba, SMM for accepting to be the Vice Archdiocesan Vicar for the Religious. You will see them coming to your communities and associations. They will only be doing their prerequisite function of bringing us together,” Archbishop George Tambala told the parked Cathedral.

Similar sentiments on unity among the clergy and religious of different congregations in the Archdiocese were made during the 2021 Chrism Mass by the care taker Archbishop Thoma Luke Msusa of the Catholic Archdiocese of Blantyre.

The Archdiocese has several lay youth groups including Parish Youth Movements, Young Christian Students/Workers, Community of Sant’Egidio and the Holy Childhood of the Pontifical Mission Society.