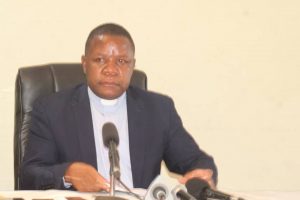 Catholic Secretariat: The Catholic Church across the world will celebrate four anniversaries (Jubilees) according the Secretary General of the Episcopal Conference of Malawi.

Rev. Fr. Dr. Henry Saindi was speaking during a press briefing on Monday 31st January, 2022 at the Catholic Secretariat in Lilongwe.

“These anniversaries are a moment of thanksgiving to God for the gift of these institutions and persons behind them that helped the Catholic faith come to other Continents and countries including Malawi,” said Saindi.

He said that through these missionary anniversaries the Church in Malawi has an opportunity to reflect about the past missionary activities that brought the Catholic faith and an opportunity for missionary reflection about the future of the Catholic Church in Malawi in the coming 50, 100 and 500 years. He therefore, encouraged Catholic communities to prepare and celebrate the anniversaries in their ordinary daily activities as faith communities.

According to him the anniversary celebrations have three dimensions namely Prayer: Offering thanksgiving prayers for the growth of the Church in many continents with so many parish Churches, priests or sisters houses, hospitals, schools, seminaries and other houses of formation constructed with the guidance from Propaganda Fide and spiritual and financial support from PMS. Offering prayers for the future of the Church in Malawi and the whole world in the years to come; Historical and missionary reflections on the strategies and activities done in the universal and local Church in the past 400, 200 and 100 years; Missionary awareness and missionary/pastoral plans for the future of the Church in Malawi and beyond for the coming 50, 100 and 500 years.

According to Fr. Vincent Mwakhwa, PMS National Director who was present at the press briefing the National Launch for these preparations will be held in the Diocese of Dedza on the 5th February 2022 when the Church in Malawi will also celebrate the Day for the Consecrated life and the Pontifical Missionary Union Day.

“Therefore, the Episcopal Conference of Malawi kindly requests all the Archdioceses/Dioceses to launch the preparations for the Anniversaries on 5th February 2022,” said Fr. Mwakhwawa.

He said that the Anniversaries will be coordinated by the Pontifical Mission Societies in collaboration with the Pastoral Offices and all pastoral agents.

The actual celebration for these anniversaries will be on 23rd October 2022, the World Mission Sunday.

Fr. Mwakhwawa said that in the past 400 years the Congregation has registered many important achievements including the Instruction of 1659 where it instructed all the Vicariates Apostolic in China and Indochina to rediscover his mission ad gentes; the Collegium Urbanum in 1627, where Pope Urban VIII (1623-1644) founded a Pontifical College for the formation of candidates for the priesthood from mission countries. He found it necessary to establish a central seminary for the missions where young priests could be educated. Today, candidates from mission countries are chosen, and sent, by their bishops to the Urbanum in Rome for their theological and pastoral formation at the Pontifical Colleges of St. Peter and St. Paul. In Malawi, we have a good number of priests have been at the PUU; the Printing Press – Polyglotta in 1926 established its own printing press called Polyglotta, for the printing of books in different languages of the peoples found in the mission territories; the establishment of new ecclesiastical circumscriptions. In Malawi, the last to be established is in the Diocese of Karonga; the ratification of institutes for the consecrated where the Congregation has approved hundreds of institutes of consecrated life with a missionary specificity or which were founded in missionary jurisdictions. Some of these institutes or congregations have been involved in the evangelisation of Africa like: the Congregation of the Holy Spirit (1703), the Society for African Missions (1856), the Missionaries of Scheut (1862), White Fathers (1868), Combonis (1855), Montfort Missionaries – 1705, the Missionaries of Consolation (1901); Pontifical Missionary Societies (PMS) was a divine providential response to the challenges the Congregation of Propaganda Fide was facing: ranging from spiritual, financial and personal resources and lack of animation to the people of God on missionary work of the Church. The Pontifical Missionary Societies (PMS) are charismatic organisations born and founded for the growth of the Mission of God. There are four namely: The Society for the Propagation of the Faith, the Society of St. Peter the Apostle, the Missionary society for Holy Childhood and the Pontifical Missionary Union of Priests and Religious. They originated from charismatic initiatives begun by lay people and priests, inspired by the Holy spirit with the intent of supporting the activity of missionaries through prayer and financial resources, animating people of God and directly involving priests, consecrated persons and lay people in prayer, in offering of sacrifice, in promoting vocations, in charitable and concrete activities for mission; and the Centre for Missionary Animation in 1986, where the Congregation constructed the Centre for Missionary Animation, or C.I.A.M beside the Collegium Urbanum. Besides other things, the centre provides renewal programs and courses in spirituality and the spiritual exercises.